FE: Troubled power cos: At least 3 firms could see resolution in two months

17 April 2019: The resolution of at least three troubled power companies, including Coastal Energen, GMR Chhattisgarh and Jaiprakash Power Ventures, could be completed in the next two months, bankers have indicated to FE.

In the case of GMR Chhattisgarh, the Adani Group is expected to take control later this month following a nominal upfront payment. Lenders have agreed to the change in management and will continue to extend loans to the business.

Also, all lenders to Jaiprakash Power are expected to approve the restructuring with the existing promoter this week. An ICICI Bank-led consortium had been looking to restructure the business which has piled up a debt of over `20,000 crore;the company has plants at Vishnuprayag, Bina and Nigrie.

According to the plan, the promoters will make an upfront payment of 20% over the next one year and lenders expect to upgrade the account by quarter ending June 2020. The account, already an NPA (non-performing asset) on the books of most banks, has been classified in the D2 category with at least one large state-owned bank.

The lenders with exposure to the project are believed to have made provisions for anywhere between 40%-50% of the total exposure.

Lenders are also hoping to complete a one-time settlement with Ahmed Buhari-promoted Coal and Oil group for control of thermal power generation company Coastal Energen. The group that once owned the 1,200-MW thermal plant based in Tamil Nadu has offered to pay `3,000 crore. Lenders are awaiting 10% of the amount upfront either as cash or in the form of bank guarantees. 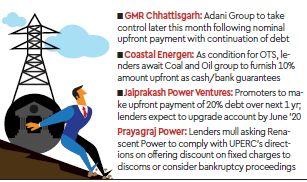 Bankers have been working to resolve stressed power assets outside the Insolvency and Bankruptcy Code (IBC) since September last year. This was after the Supreme Court asked Reserve Bank of India and others to desist from invoking insolvency proceedings against corporate defaulters per the February 12 circular.

Resolution to Prayagraj Power Generation Company (PPGCL), however, could stretch further, lenders aware of the developments told FE. Renascent Power Ventures, arm of Tata Power-backed Resurgent Power Ventures that acquired 75% in PPGCL is unhappy with the Uttar Pradesh energy regulator UPERC’s direction asking to offer a discount of 14 paise/unit on the fixed charges to the state power distribution entity (discom).

While Renascent Power Ventures has suggested that bankers appeal the UPERC order at the Appellate Tribunal for Electricity, circumstances indicate the process could see a 6-8 month delay.

Given the circumstances, PPGCL lenders are considering asking Renascent Power Ventures to comply with the UPERC’s directions or consider bankruptcy proceedings.

“For lenders, the consideration to appeal the UPERC it is a difficult decision since it could take several months. One interesting factor though is a certain clause within the power purchase agreement with the discoms that gives PPGCL the option not to have to comply with the direction on discount on fixed charges. However, the clause is only valid if 26% stake is with the promoter, which Renascent may not agree to.”

Around 34 stressed power assets are named in a Parliamentary Standing Committee report and 11 plants, with a capacity of around12-15GW, and a total debt of around Rs 80,000-90,000 crore are being resolved under SAMADHAN (Scheme of Asset Management and Debt Change Structure). Under SAMADHAN, banks are required to assess the sustainable debt of the units.

A majority of experts have observed that the apex court’s decision to declare the RBI’s February 12 circular ultra vires would bring relief to power and infrastructure companies. However, soon after the decision, bankers noted that even with the SC’s September direction against invoking insolvency proceedings in stressed power assets, there has been little progress in resolution. To date, the only successful resolution has been in case of SKS Power Generation (Chhattisgarh) that was taken over by Hong Kong-listed company Agritrade Resources.