Home › General News › LM: Etihad unlikely to get on board with Jet Airways bailout plan

LM: Etihad unlikely to get on board with Jet Airways bailout plan

A meeting of the board of Etihad in Abu Dhabi on Tuesday remained inconclusive, with several members expressing reservations about the terms proposed by the lenders that included adding two nominee directors from the promoter group of Jet Airways, led by founder Naresh Goyal, the people cited above said on condition of anonymity.

“Another contentious issue was Goyal’s demand for exclusion of the perpetuity clause, which capped Goyal’s shareholding to 22%,” said one of the two people cited above.

The provisional pact envisaged a “new investor” injecting between  ₹1,600 crore and  ₹1,900 crore for about 20% in Jet Airways and the Goyal-led promoter group’s stake falling to 17.1%, with a caveat seeking to cap it at 22%.

An early resolution to the financial woes is crucial for Jet Airways. More than 50 of the airline’s 119 planes are currently grounded by lessors due to non-payment of lease rentals, while it has delayed salaries to pilots and interest payments on its debt.

According to the proposed agreement, the consortium of lenders, led by the State Bank of India (SBI), will convert its dues into shares and pump in an additional ₹1,000 crore to raise its stake to 29.5%. Etihad was also expected to infuse between  ₹1,600 crore and  ₹1,900 crore to raise its shareholding to 24.9%.

The exact details would be known once a deal is finalized. 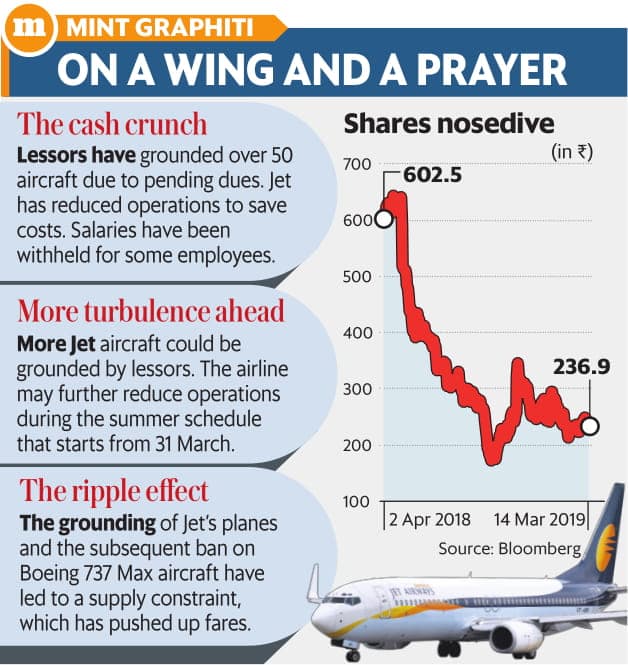 “Etihad may still consider a rescue plan and the board is expected to meet again to discuss revised terms,” said the first person cited earlier.

Mint reported on 12 March that Goyal had written to Etihad seeking an emergency cash infusion of  ₹750 crore. In a letter that was reviewed by Mint, Goyal cited Jet Airways’ financial stress that had led several of its lessors to ground planes due to non-payment of dues.

In a separate letter on 8 March to Tony Douglas, group chief executive officer of Etihad Aviation Group, Goyal sought dropping of the perpetuity requirement of capping promoter shareholding to 22%.

Jet Airways and SBI did not respond to emailed queries. A spokesperson for Etihad said the airline “does not comment on rumour or speculation”.

Meanwhile, Jet Airways said on Thursday it would be unable to repay $140 million of external commercial borrowings (ECB) of HSBC Bank UAE. The repayment obligation falls this month, with Jet Airways originally expected to make the repayment through two tranches on 11 March ($31 million) and 28 March ($109 million), respectively.

“Jet Airways is currently facing severe liquidity constraints and is working through a bank-led resolution plan for its revival,” Jet Airways said in an 11 March letter to HSBC Bank Plc (UK), which was reviewed by Mint. “Pending the implementation of measures listed in BLPRP (bank-led provisional resolution plan), we wish to inform you that the company is unable to pay Tranche A of $31 million falling due to repayment today,” it added. Etihad is the guarantor of the $140 million ECB facility raised by Jet Airways from HSBC Abu Dhabi.

Jet Airways, which is facing a severe cash crunch, had defaulted on a domestic loan repayment in December. According to Reserve Bank of India (RBI) regulations, lenders must find resolution to cases pertaining to defaulting companies—such as Jet Airways—within 180 days of their first default.

If the case remains unresolved, the company has to be referred to a bankruptcy court. Jet Airways had first defaulted on a scheduled interest payment to domestic lenders on 31 December.

The airline had a gross debt of  ₹8,411 crore as of September-end.

Etihad holds a 24% stake in Jet Airways, while promoter Goyal and his family own a controlling 51% stake. Etihad has lost $1.28 billion in 2018, the third straight year the state-owned long-haul carrier has lost over a billion dollars. Since 2016, Etihad has lost a total of $4.75 billion, as its strategy of aggressively buying stakes in airlines from Europe to Australia didn’t reap the desired benefits.

In 2017, Etihad had to write off its investments in Air Berlin and Alitalia.

Meanwhile, oil prices, which drive West Asian economies including that of Abu Dhabi, have settled from their historic highs of over $100 a barrel to $65-70 a barrel. This has further restricted investment capabilities of West Asian carriers and its state-owned airlines.